Destiny Carreno was waiting in line at a Chicago McDonald’s when she witnessed something that brought tears to her eyes.  An elderly and handicapped man came up to the counter in a wheelchair and asked the cashier for help. It took a couple of tries to figure out what he was saying, but the cashier eventually understood that the man needed help cutting and eating his meal. What happened next was so amazing that Carreno shared it on her Facebook page.  It has now reached over 300,000 shares and has gotten more than 2.3 million views on other social media platforms.

She was touched by his compassion

“To be honest, I thought the cashier wasn’t going to help, especially during rush hour in downtown Chicago,” Carreno admitted. “But to my shock, he shut down his register and disappeared from view….The cashier came out from the kitchen, sat down, and began cutting the man’s meal and helped him eat.” Carreno said she was brought to tears in appreciation for the cashier’s efforts.
“This employee, who put everything on hold for this man, went above and beyond his responsibilities to help this handicapped customer out. That was the kindest and most humble thing I had ever seen.” 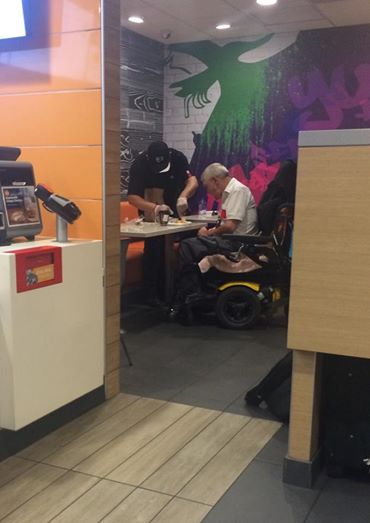 The cashier is being honored by the owner

The owner of the Chicago McDonald’s, Rod Lubeznik, identified the cashier as a man named Kenny Soriano-Garcia.  He says the company is very proud of their cashier and is “overwhelmed by the positive response [Kenny] has received for his compassion and kindness.  It’s a true testament to who Kenny is, and a reminder to us all that one seemingly small act of kindness can touch the hearts of so many,” he said in a statement.  He also said that Kenny was specially recognized during a rewards ceremony. 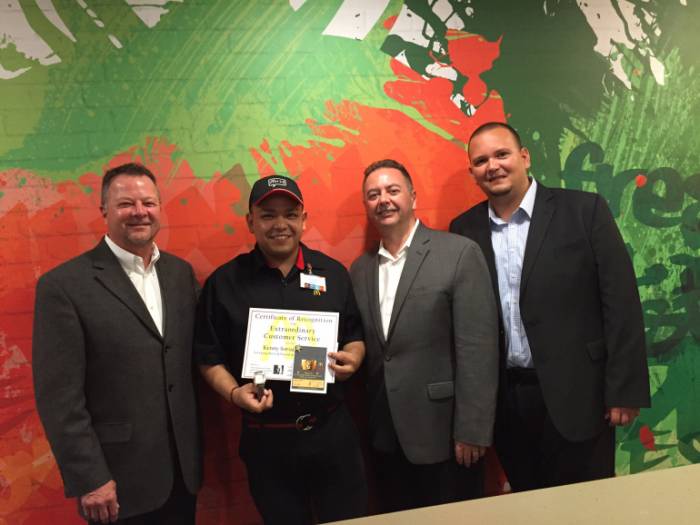 SEE ALSO: Search helps He Helps His Disabled Friend In The Most Touching Way.