Most beauty pageants are boring and pretty predictable. This year’s edition of Miss Universe was held at the Planet Hollywood Resort & Casino in Las Vegas and for once was pretty unconventional.

As he was announcing the names of the top three contestants of the pageant, American comedian Steve Harvey, who was hosting the event, named Miss Colombia, Ariadna Gutierrez-Arevaldo as the new Miss Universe. Suddenly, Harvey came back on stage after a strange pause and made an announcement:

“The first runner-up is Colombia […] Miss Universe 2015 is Philippines,” he said. “Listen, folks. Let me just take control of this,” he added. “This is exactly what’s on the card. I will take responsibility for this. It was my mistake.”

He had named the wrong contestant. Outgoing Miss Universe Paulina Vega, who is also from Colombia, removed the crown from Gutierrez’s head and placed it on the rightful winner, Pia Alonzo Wurtzbach. 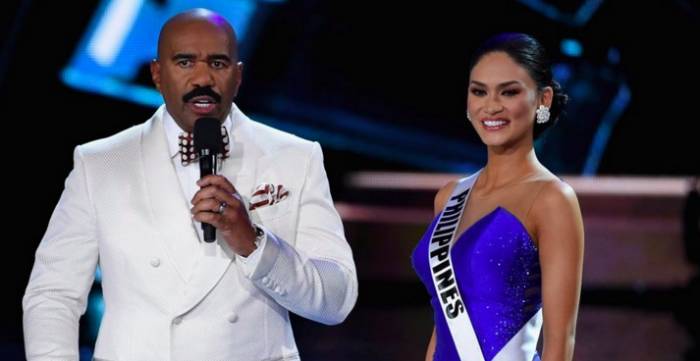 Watch a video of the incident below:

“The excitement of live TV was evident tonight on the Miss Universe stage with over 10 million live fan votes tabulated,” they said. “Unfortunately, a live telecast means that human error can come into play. We witnessed that tonight when the wrong winner was initially announced.”

Harvey attempted to correct his error and issued another apology on Twitter, but things went wrong again: he misspelled Colombia and Philippines. 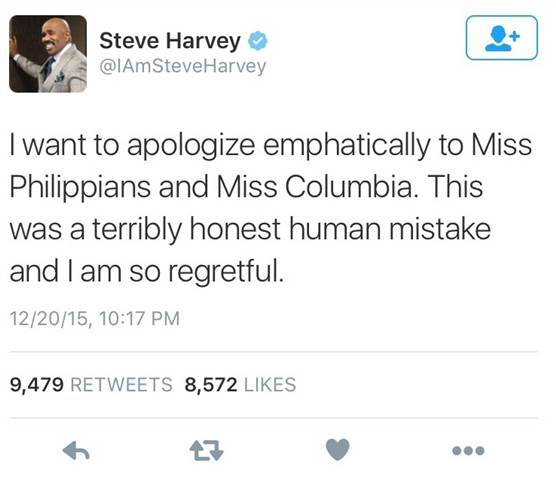 Some people made jokes at Steve Harvey’s expense 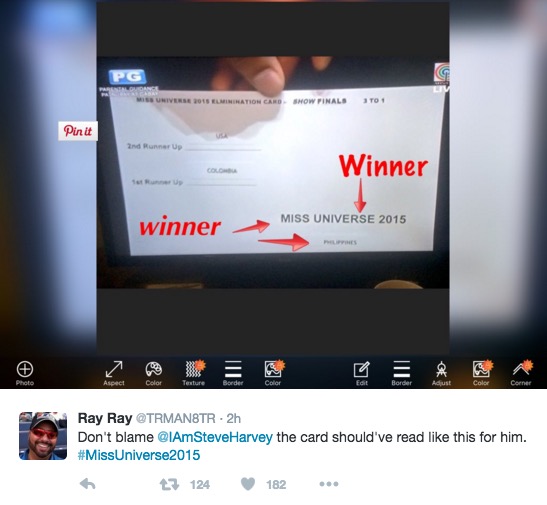 Others appreciated his honesty and his apology. Everybody makes mistakes.