At this year’s Grammy Awards, Taylor Swift became the first woman to win Album of the Year twice. During her acceptance speech, she appeared to throw some shade at Kanye West.

These two artists go way back. Things all started at the 2009 MTV Video Music Awards. Swift was still a relatively fresh new artist and had just won her first VMA. Her video for “You Belong With Me” won the Best Female Video award, beating out Beyoncé’s “Single Ladies (Put a Ring on It).” Swift’s excitement was quickly ruined when West jumped onto the stage and uttered the now famous words:

When he heard the audience booing him, he shrugged and handed the mike back to Swift. His performance was then cancelled and anytime his name was mentioned at the show, it was met with boos. Beyoncé later won the award for Video of the Year and let Swift give her acceptance speech properly. Celebrities rallied behind Swift; even President Obama chimed in and called West a jack*ss. West apologized several times. At the following VMAs, Swift performed the song “Innocent” in response. The lyrics include:

West backtracked on his apology a couple of times and insinuated that his actions helped Swift’s career. But nothing major happened for another six years.  Until, out of the blue, West released his song “Famous.” 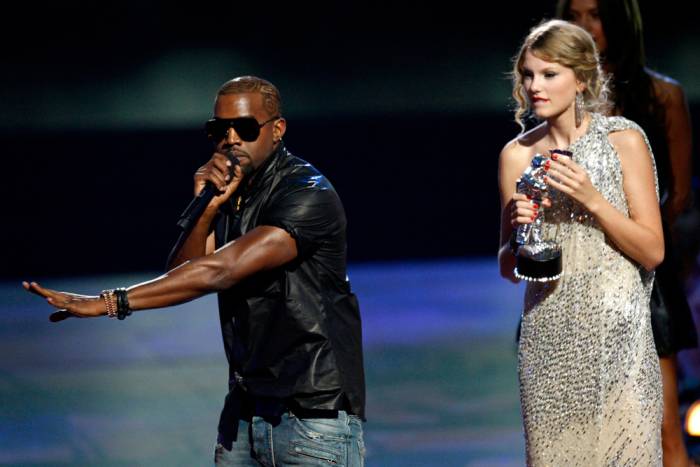 He threw the first punch

The lyrics brought up Swift:

West immediately received backlash for the song. Swift’s close friends and other celebrities defended her and criticized the rapper for the misogynistic line. Actress and musician Ruby Rose tweeted:

“Too many lines crossed. If I put myself in the shoes of the women he has hurt recently. Victims of Bill Cosby, The Slut shaming, Amber…”

In an interview with SiriusXM Hits 1, Selena Gomez responded:

“Everybody has their own opinion. At the end of the day, you can just do what you do…She’s killing it and she kind of always has been.”

West said he did not diss Taylor and that he had gotten permission from Swift, which her PR has denied:

“Kanye did not call for approval, but to ask Taylor to release his single ‘Famous’ on her Twitter account. She declined and cautioned him about releasing a song with such a strong misogynistic message. Taylor was never made aware of the actual lyric, ‘I made that b*tch famous.’”

West is still maintaining that Swift was on board.  He even said that the lyric was her idea; he claimed that she told a mutual friend she could not be mad at him because he made her famous.

The media was anxiously waiting for Swift to publicly respond. The moment finally came at the Grammy Awards.

“And as the first woman to win Album of the Year at the Grammys twice, I want to say to all the young women out there: There are going to be people along the way who will try to undercut your success or take credit for your accomplishments or your fame,” she said.

Though she did not name any names, it was pretty clear who she was talking about.

“But if you just focus on the work and you don’t let those people sidetrack you, someday when you get where you’re going, you’ll look around and you will know that it was you and the people who love you who put you there. And that will be the greatest feeling in the world. Thank you for this moment.”

West will likely have something to say to that. A source told HollywoodLife.com that “Kanye is adamant that he will get the last word in the feud he has with Taylor.” 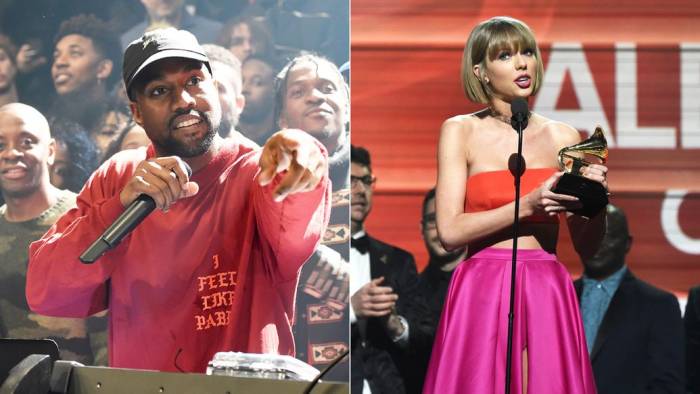