Eugene Bostick is an 80-year-old who lives in Texas. He is retired from official work, but he has taken up a new job. Eugene and his brother Corky have been helping stray and abandoned animals for the last 30 years.

They took in dogs left to die

“We live down on a dead-end street, where me and my brother have a horse barn” Eugene said. “People sometimes come by and dump dogs out here, leaving them to starve. So, we started feeding them, letting them in, taking them to the vet to get them spayed and neutered. We made a place for them to live.”

The brothers have taken in a countless number of dogs over the last three decades; they currently have 9 living with them. 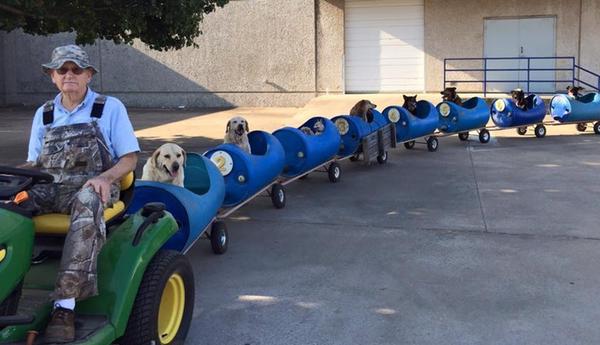 He wanted to do even more for them

The brothers opened up their home for the dogs. They have plenty of room to play and run around, but Eugene wanted them to have even more. He wanted to take them out on little adventures and see the town.

“One day I was out and I seen this guy with a tractor who attached these carts to pull rocks. I thought, ‘Dang, that would do for a dog train,’” he said. “I’m a pretty good welder, so I took these plastic barrels with holes cut in them, and put wheels under them and tied them together.” 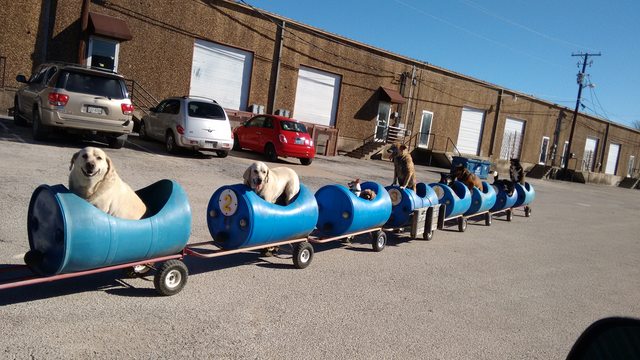 The dogs love it

Once he had the train built, Eugene started to take the dogs out a couple of times a week for some fresh air. The dogs absolutely love it – “Whenever they hear me hooking the tractor up to it, man, they get so excited. They all come running and jump in on their own. They’re ready to go.” They ride around town, through the forest near the farm, and to a local creek. 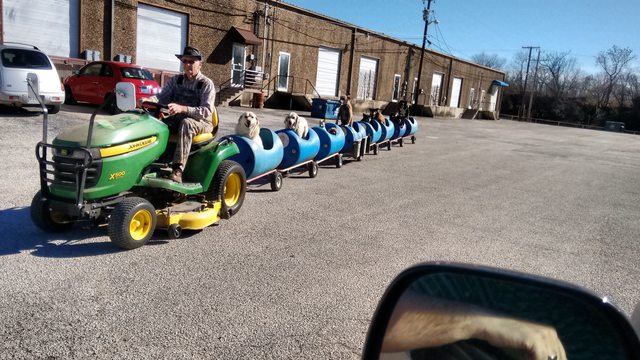 People around the Texas town started noticing the adorable dog train and it soon became locally famous. Several people asked Eugene if they could take a picture of him with the dogs. The story went viral when one woman named Tiffany Johnson posted a picture of the dog train on Facebook, which has now reached over 50,000 shares. But Eugene does not care about the attention he is getting, he just wants to keep doing it because his dogs love it so much.

“I’m getting up in age. I’m 80 now, so I suppose it can’t last too much longer, but I’ll keep it going as long as I can.  The dogs have a great time. They just really enjoy it,” he said.