Nigerian Women Share The Discrimination They Face Every Day

Earlier this week, the hashtag #BeingFemaleInNigeria started trending on social media. Nigerian women, and a few men, used the hashtag to share stories of their experiences with everyday gender discrimination in the country.

A small book club of only 15 members called the Abuja book group started the trend. They were inspired to spark this discussion after reading Chimamanda Ngozi Adichie’s essay “Everyone Should Be a Feminist.” Ngozi is a well-known Nigerian author who had a very famous TED Talk that ended up being sampled by Beyoncé in a song called “Flawless.” The book club’s discussion quickly turned into a conversation about people’s experiences with gender discrimination. After sharing their stories, members of the group thought that these experiences should be extended to a wider audience. They began tweeting with the hashtag #BeingFemaleInNigeria.

Some Stories Were Common

This user commented on how men and women customers are often treated differently.

Some Were Relatable to Women Everywhere

Many women pointed out the pressure they felt to stay in relationships and get married.

Others Were Quite Strange

Apparently people assumed this woman was an escort because she was staying alone in an upscale hotel.

Many landlords do not like to rent their property to single women.

Not Everyone Was a Fan

The campaign was criticized by some people. 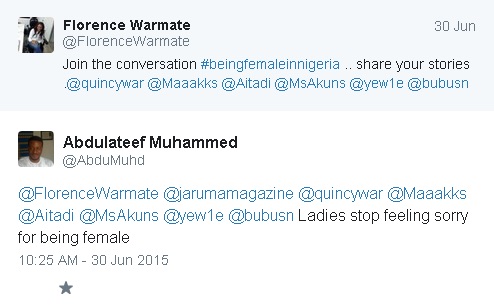