The Zone 9 blogging collective is a group of 9 bloggers that was formed in May 2012 in response to a government led repression of the Ethiopian independent press. In 2014, 9 bloggers and journalists affiliated with Zone 9 were arrested and charged under Ethiopia’s antiterrorism law that was designed to curb freedom of expression. They were accused of plotting to incite violence and collaborating with banned opposition groups.

The group recently received the 2015 International Press Freedom Awards in a ceremony that took place at the Waldorf Astoria hotel in New York City. The CPJ International Press Freedom Awards honor journalists around the world who fight for press freedom despite facing attacks, threats, or imprisonment. The awards are administered by the Committee to Protect Journalists, an independent, non-governmental organization based in New York City. Members of the collective include Abel Wabella, Atnaf Berhane, Mahlet Fantahun, Natnail Feleke, Zelalem Kibret, Befekadu Hailu, Soleyana S. Gebremichael, Endalk Chala, and Jomanex Kasaye. Unfortunately, only Soleyana and Endalk were present to accept the awards.

“For us, telling stories and blogging help us to understand our country better. We believe storytelling involves exercising democracy and learning responsibility. In a country where journalism is pushed aside and equated with terrorism, in a country where holding a different opinion is a crime, in a country where a ruling party ‘won’ all the parliamentary seats and controls life on an Orwellian scale, blogging is the only possible way out to truth.” That was what we did, they said in their acceptance speech. 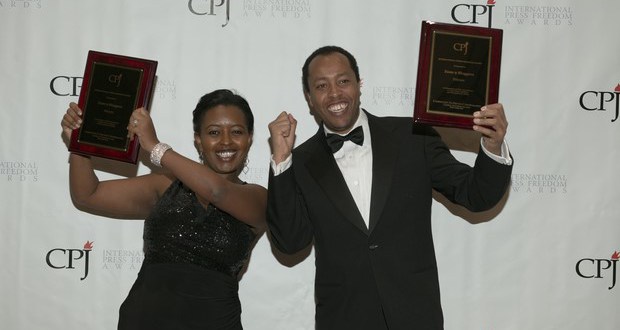 Zone 9 refers to the zones in the Kality Prison, the main jail where Ethiopia’s political prisoners are incarcerated. The prison is organized in 8 different sections however, the bloggers believe that Ethiopia is becoming a bigger prison, which is where the “9” comes from. Their motto is “We Blog Because We Care.” Ethiopia is ranked 142nd out of 180 countries in the 2015 Reporters Without Borders press freedom index.

Watch a video of the acceptance speech below: