If you are an avid Davido fan and you have been following him on social media, you must have definitely noticed that he’s been hinting at a surprise. Well, the wait is over. Davido just inked one of the biggest recording deals of his career. This could be the reason why he pushed back the highly anticipated album release of OBO The Baddest so many times in 2015.

According to his social media pages, Davido has signed a seven-figure global publishing deal with Sony Music at their New York city headquarters. The signing occurred in the presence of his brother and manager Kamal Ajiboye. While details of this deals have not been released yet, this new contract will allow Davido to promote his music and merchandise on a global platform. Davido posted an emotional message on his Instagram account. The posts says:

TO ALL THOSE THAT DOUBTED ME!! ITS A DONE DEAL! 1ST AFRICAN ARTIST TO SIGN A GLOBAL RECORD DEAL !! MY STORY IS JUST STARTING!! MY MOTHER IS SMILING IN HEAVEN RIGHT NOW!! SONY MUSIC ENTERTAINMENT !! OWO TI WOLE@sonymusicglobal 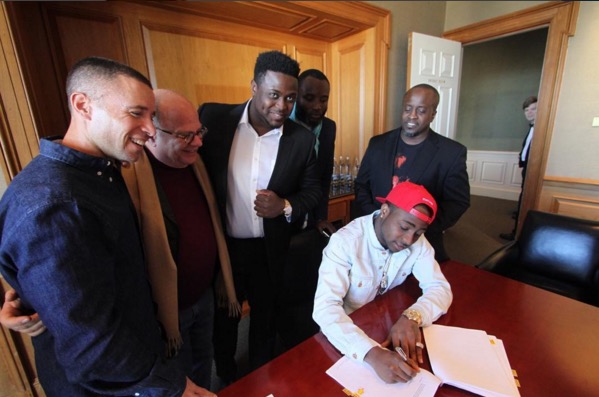 Sony Music boasts an extensive roster of very successful artists such as American rapper Future. You can expect some banging collaborations from Davido in the upcoming months. Congrats to Davido and thank you once again for putting the African music on the map.

SEE ALSO: Davido Buys Himself An Audi R8 As An Early Birthday Present.